Blog - Latest News
You are here: Home / News / Rolo refuses to roll over 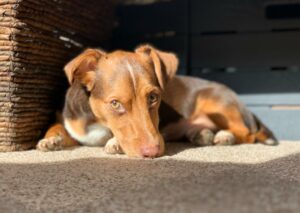 Rolo came to us with diarrhoea and vomiting whilst we were in ‘lockdown’. During this time we are not letting clients in the building and maintaining social distancing, so we had to get his story outside (fortunately in the sunshine!) whilst standing 2m from his owner. Rolo has been known to chew stones and the odd toy. After we had discussed his condition, we took Rolo inside the practice to give him a full examination and administer treatment. We are still seeing the tailend of the sickness bug that has been with us most of the winter and Rolo looked very much like he had caught this. However, despite treatment he didn’t improve and became quiet, hiding away and the diarrhoea continued, now with blood in it.

Rolo came back to us as he hadn’t improved and we decided to admit him and put him on a drip. We ran blood tests and took x rays but everything seemed reasonably normal. He continued to go downhill, with more vomiting and bloody diarrhoea. We were worried there might be a foreign body (e.g. one of his toys he might have eaten!) in his gut at this point. There are only two ways to be sure of this, we could either send him for a scan or take him to surgery to have a look. Because there was little sign of improvement, we decided to perform exploratory surgery as an emergency as we were getting concerned about his condition. Again we found nothing apart from a sore gut! It was a relief there were no chewed up toys or stones inside Rolo, and with further treatment (and lots of TLC!) he showed some improvement and we let him go home.

Luckily, Rolo responded well to treatment and is now happy and back to normal at home.

We are running on a skeleton staff, everyone doing a bit of everything so we all got involved with, and very attached to, this lovely dog. Throughout his illness, Rolo was calm and happy, he let us do all we had to do without so much as a flinch. When we medicated him he would wag his tail and happily let us do what needed to be done. One of the nurses wrote on his hospitalisation sheet ‘Enjoyed a good fuss!’. Once he had improved, on each visit we had to take him all round the practice to say hello to all the staff as we had all connected so well with him, He is a special dog.

This case illustrates one of the problems we often face, without our pets being able to speak and tell us how they feel and what they have been up to, and without the array of services and tests available to people, we often never know for certain what illnesses our pets have and we have to treat the symptoms. Because animals don’t understand what we are doing and can find the trip to the vets very stressful so it is lovely to have a dog who is so chilled about life. We wish Rolo and his family all the best for the future. 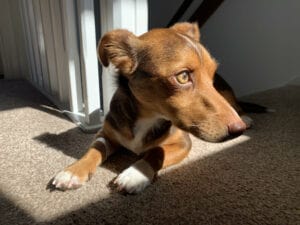 Chips With Everything ( Particularly Cats )